What is it?
Early-onset generalised dystonia, the most common hereditary form of dystonia, is characterised by the twisting of the limbs, specifically the foot/leg or hand/arm. The spasms may spread to involve twisting contractions of other parts of the body. 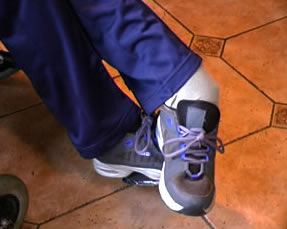 Symptoms in early-onset generalised dystonia can range from twisted postures for example in the torso or limbs, turning in of the foot or arm, muscle spasms with or without pain, unusual walking with bending and twisting of the torso, rapid, sometimes rhythmic, jerking movements( often myoclonic jerks) and progression of symptoms leading to sustained or fixed postures. Because the legs and trunk are so commonly affected in early-onset generalised dystonia, abnormal gait may be common.

Symptoms often begin in one area of the body and spread to other areas. Factors such as age and body site play a significant role in the progression of early-onset generalised dystonia. The younger the age of onset, the more likely the dystonic symptoms will begin in one of the legs, spread upward to other areas, and possibly become generalised. However, if symptoms begin in the arm or neck, the progression to other areas of the body may be less likely. The age of onset varies, but the peak period is between the ages of seven and 10 years with symptoms progressing, then stabilising within a five-year period.

In generalised dystonia that begins in the arm, symptoms may be task-specific, i.e. apparent only during specific actvtities  such as  the act of writing or playing a musical instrument. If the disorder progresses, the symptoms of arm dystonia may appear when another part of the body is engaged in voluntary motor activity. If the dystonia spreads to involve parts of the body other than the limb of onset, it will first move to adjacent segments of the body, and then outward to areas farther from the site where symptoms began.

Dystonia is usually present continually throughout the day whenever the affected body part is in use and may disappear with sleep.

If early-onset generalised dystonia causes any type of impairment, it is because muscle contractions interfere with normal function. Features such as cognition, strength, and the senses, including vision and hearing, are normal. While dystonia is not fatal, it is a chronic disorder.

The DYT1 gene mutation may also be referred to as a GAG deletion, referring to the specific section of DNA that is missing. Exactly how the abnormal gene causes dystonia is presently unknown, and a major focus of research efforts.

For persons with early onset generalised dystonia who do not have the DYT1 mutation, the cause is presumed to be primary, meaning that there is some genetic component that has yet to be identified. Secondary forms of generalised dystonia, such as dystonia secondary to cerebral palsy, may also begin in childhood.

Diagnosis of early onset generalised dystonia is not made by one definite test, but rather primarily on information  from the affected individual, a physical and neurological examination. In most cases, assorted laboratory tests are normal and used to rule out other disorders.

A genetic test is available to detect the dyt1 gene mutation to confirm a DYT1 dystonia diagnosis.

Treatment
Currently there is no cure for dystonia, but treatments are available to help to ease the symptoms related to the disorder including spasms, pain, and disturbed postures. Working with your doctor, an individualised strategy for treatment can be developed.

The approach for treatment of dystonia is usually three-tiered: oral medications, botulinum toxin injections, and surgery. These therapies may be used alone or in combination. Complementary care may also have a role in the treatment management, depending on the form of dystonia, and supportive therapy may provide an important adjunct to medical treatment.

Medications
Treating generalised dystonia is a step-by-step process. Physicians need to be very conscious of how their patients are reacting to prescribed medications and potential side effects. There are many pharmacological options for dystonia, and physicians depend heavily on oral medications to treat this form of dystonia. The most thoroughly studied medications used to treat dystonia are anticholinergics, the most popular of which are Artane (benzhexol) and Cogentin (benztropine). Children can tolerate much higher doses of these medications than adults can, but, as children age, the dose may need to be decreased, usually without a significant loss of effectiveness. Side effects related to Artane may include confusion, forgetfulness, memory loss as well as lesser effects such as dry mouth, blurred vision, and trouble urinating.

A child diagnosed with early-onset generalised dystonia will often receive a trial prescription of levodopa to rule out dopa-responsive dystonia. Levodopa can have remarkable benefit for people with dopa-responsive dystonia, and it can sometimes help the symptoms of generalised dystonia. Side effects may include light-headedness, nausea, constipation, and sometimes fatigue.

Botulinum toxin is a therapeutic muscle-relaxing agent that helps reduce the uncontrollable muscular contractions associated with dystonia. It is injected into specific muscles where it acts to weaken muscle activity sufficiently to reduce a spasm but not enough to cause paralysis.

Surgery
Surgical treatment for dystonia is usually reserved for those persons where the potential benefits outweigh the potential risks and for those for whom non-surgical treatment is no longer providing adequate control of the symptoms. Each patient is unique, and the muscles involved vary from one patient to another. It is for this reason that pre-operative evaluation by a movement disorders expert is essential.

Several surgical techniques may be appropriate for select individuals who do not respond to medications and botulinum toxin injections. The include ablative surgeries such as pallidotomy and thalamotomy, intrathecal baclofen and deep brain stimulation

Complementary therapies may be explored, particularly physical therapy may also play a treatment role. In some cases stretching can be helpful to preserve a full range of motion. Strengthening exercises can also be beneficial if they are not too strenuous and are specifically suited for each individual case. Aquatic physical therapy, and regular relaxation techniques.

The use of sensory tricks is also effective in dealing with early-onset generalised dystonia. Some of the common “tricks” used are touching the involved or adjacent body part, elevating one leg when standing in one place, or placing one hand on the back of the head when the trunk is involved. Different sensory tricks work for different people, and if a person finds a sensory trick that works, it usually continues to work.

Support
Dystonia and its emotional offshoots affect every aspect of a person’s life – how we think, the way we act, and how we cope. By educating yourself with information, you have taken the first step in dealing with dystonia.

Stress is an inevitable part of life, and although it clearly does not cause dystonia, it can aggravate dystonia symptoms. Stress-reduction programmes such as relaxation techniques, meditation, and journal writing may be beneficial.

Many people are experiencing similar symptoms. Reassurance from family, friends, and others who have dystonia is beneficial.  Sharing experiences at support group meetings offers encouragement, camaraderie, and the latest information about new treatments and medical advances.

Dystonia Ireland gratefully acknowledges  the Dystonia Medical Research Foundation for use of this information.

Tweets by DystoniaIreland
Scroll To Top